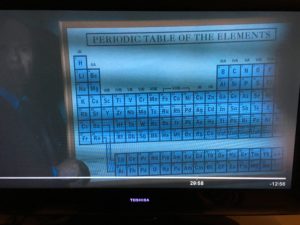 I come from a very scientifically-inclined family. Growing up, our home was full of books and LEGOs and musical instruments. One of the things my dad would do with the kids is help us learn how to memorize things. We’d learn all sorts of well-defined sequences of things, and chief among them was the Periodic Table of the Elements.

Every evening as he’d put us to bed, we’d start practicing the Table: “one hydrogen, two helium, three lithium, four beryllium, five boron, six carbon, seven nitrogen, eight oxygen, nine fluorine…” Once we could recite all 103 (at the time) elements in order, we’d get a trip to Baskin Robbins to order anything we wanted. Amazing what motivates kids, huh?

A couple of interesting things has come as a result of this.

One amusing thing is that when the movie The Fifth Element came out, I spent a long time wondering why Boron would be worth making a sci-fi movie about. Was the movie about a universal shortage of Boron or something? Turns out the fifth element is Love. 🤷‍♂️

Another thing is that I am hyper-vigilant about the portrayal of the Table in TV and Movies. Last night as I was watching a recent episode of Agent Carter, I noticed a Table on the wall behind one of the characters.

So thanks, Dad. Not only are my rote memorization skills honed, but I can use those skills to critique mistakes in mainstream TV. 👍